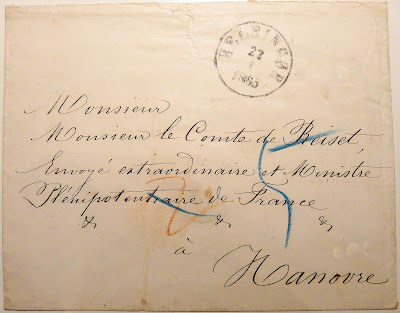 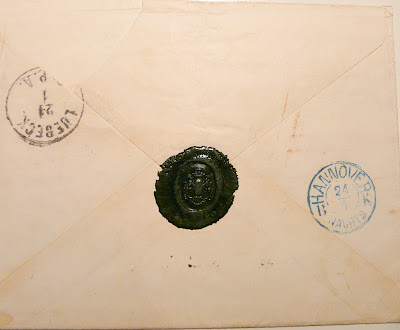 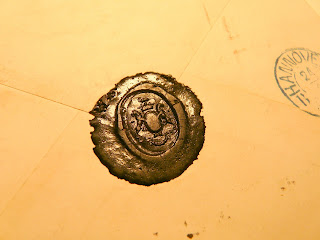 This is a cover of a letter send from Helsingør on 22 january 1865 to Hanover. Helsingør (also known as Elsinore in English) is a city on the northeast coast of the island of Zealand (Danish: Sjælland) in eastern Denmark. Hanover is in North Germany, about 520 kilometer southwest of Helsingør. 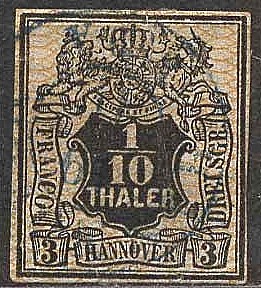 The letter was send to an official of the Franch state: someone with the rank of a minister.

What was the political situation in Hanover 1865? After Napoleon I imposed the Convention of Artlenburg (Convention of the Elbe) in 1803, about 30,000 French soldiers occupied Hanover. The Congress of Vienna in 1815 elevated the electorate to the Kingdom of Hanover. In 1837, the personal union of the United Kingdom and Hanover ended as William IV's heir in the United Kingdom was female (Queen Victoria).

(The House of Hanover - 15 September 2011 - stamps and miniature sheet. The penultimate Kings & Queens issue covers the Hanoverian era from 1714 to 1901).
According to Salic Law Hanover could only be inherited by males.
As a consequence, Hanover passed to William IV's brother, Ernest Augustus, and remained a kingdom until 1866, when it was annexed by Prussia during the Austro-Prussian war.
Gustave Armand Henri, Comte de Reiset, 1821-1905 was a "ministre plénipotentiaire" of Napoleon III of France in Hanover. 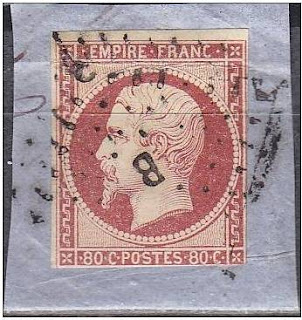 (Stamp Napoleon III)
De Reiset was ennobled by King Louis-Philippe and adopted the "devis" : "Faire sans Dire" (do without saying).  He was also member of the Conseil General of the Eure, a region in France. He owned a castle there. 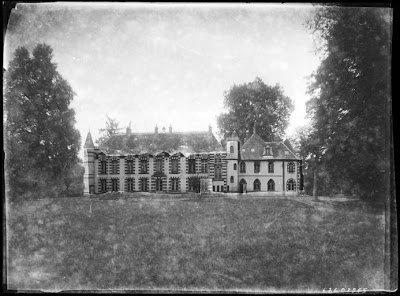 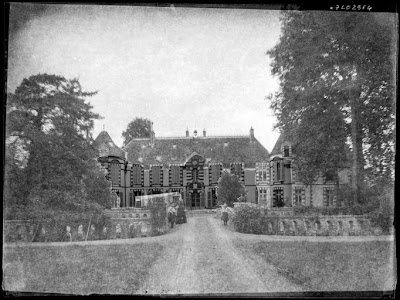 (Photos: French Ministère de la culture - base Mémoire)
These are photos of his "Château du Breuil" in Haute-Normandie; Marcilly-sur-Eure (photo around 1900 - 1920).  The Comte de Reiset acquired the Breuil in 1842. The church, at that time, served as a barn. Restored in part, it was destined again to worship in 1854 and then turned into a museum by de Reiset. He filled the museum with objects he reported from his travels. It was possible to admire numerous paintings and ancient statues. De Reiset died in 1905, the church passed to his heirs. The building building was hardly maintained during the second half of the 20th century. Objects of art were scattered and the building fell in despair.
It was classified as an Historical Monument in 1993 and acquired in 1995 by a couple who then started the restoration. It cannot be visited today.
You can google some artefacts that formerly belonged to Mr. de Reiset, such as this portrait of the famous painter Ingres, this painting is entitled Madame Aymon or  "La Belle Zelie". 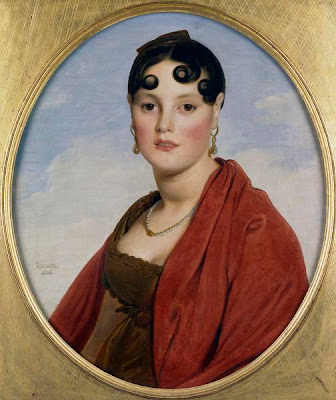 This painting was auctioned in 1870, the same year that Napoleon III lost his war against the Prussians at Sedan and it was the end of his reign.

I have a second cover of a letter written to the same Comte de Reiset. It was sent in 1862 from  Frankfurt to Darmstadt.
I do not know about where these covers come from and who took interest to keep them all these years. I bought them in the US, but no story came along with them. 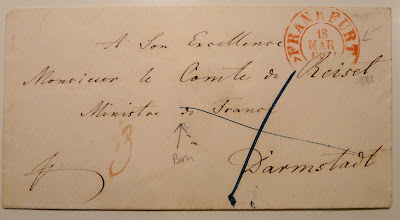 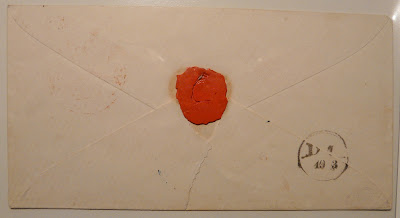